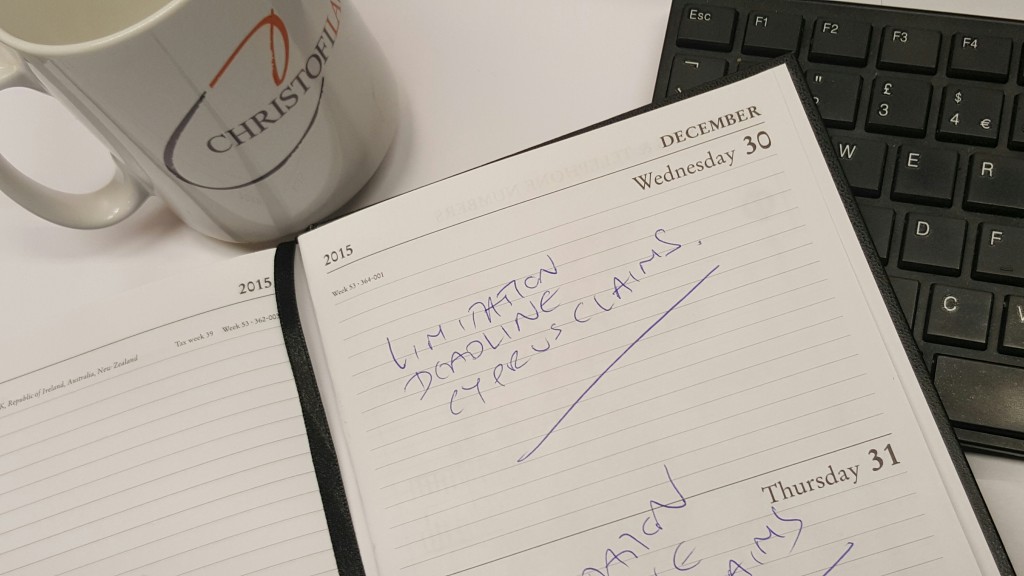 For those people considering proceedings in the Cypriot Courts against their Cypriot banks, developers and advisers, the limitation period for doing this expires on 31st December 2015.

In practice what that means is that if potential claimants do not issue proceedings before then, then they will be prevented from raising as a defence the negligence of their bank, or professional advisers, even if subsequently there is case law ( or statute) in favour of buyers of mis-sold property.

Prior to that date the limitation period was 31 December 2014 and it had been expected that there would be no extension to limitation. Banks and lawyers in Cyprus (also in the firing line) had been lobbying for no further extensions but the extensions were eventually granted. It is not clear why the extension had been mooted in the first place although it is believed that one factor may have been that the British Government may have lobbied for the assistance of its Cypriot counterparts given the burgeoning relationship between the two countries.

It means the prospects for a further extension are bleak. If potential claimants do not issue proceedings, and subsequent case law or statute is introduced which helps those parties who have issued proceedings, then those who have not issued will not likely benefit from any case law or statute – much along the lines of “if you don’t buy a ticket you can’t win the lottery” .

Chris Christofi states “its unlikely that any subsequent law or statute would have a retrospective effect – much like it would be unlikely in the UK in similar circumstances. It means that people will not likely get the benefit of the many advances that there have been over the last year in relation to mis-sold property, such as the European Cases supporting Swiss Franc and foreign currency claimants if they do not issue proceedings”.

Chris has also pointed out that anyone intending to issue must contact their lawyers well in advance of the deadline as it is unlikely that people will be willing to assist with issuing “last minute claims” during the Christmas and New Year holiday.

Recent events such as the passing of the title deeds legislation suggest that there is a positive move in Cyprus to deal with the effects of property mis-selling there.