BA Hons Partner; Solicitor of the Senior Courts of England and Wales ; member of the Law Society; educated at Bancrofts School and De Montford University trained and qualified at Richard West Freeman Christofi where she became a partner in 2001.

Founded Christofi Wells Solicitors in 2008; specialist in Housing Association work and on the panels of a number of well known housing associations. Practical and personable, has an endearing approach in dealing with matters and people.

Alone in her office when she first started her practice, Rea’s dachshund – sausage dog – “Jasper”- would keep her company and startle any unsuspecting visitor with his bark. Jasper is now a well known fixture at the office as well as a mascot of sorts – clients still pop into the office to enquire about him. 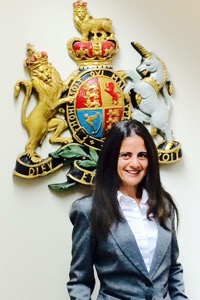