Taking the bank to court

“It is well enough that people of the nation do not understand our banking and monetary system, for if they did, I believe there would be a revolution before tomorrow morning…”

Disputes in connection with your bank or lender which are not settled through the Financial Ombudsman such as Foreign Currency Loans or Interest Rate Swaps (“Hedging”).

Banks will generally seek to control your ability to sue them through the use of draconian terms and conditions.

“Swaps litigation” – Litigation arising out of Interest Rate Swaps with consumers and small companies who looking to cover potential increases in their mortgage loans, entered into an Interest Rate Swap ( also known as an “IRS”) with a bank.

Claims have been made against the banks both in the UK and abroad ( particularly Spain) requesting the courts to declare the swaps null and void, on the basis that the customers were not properly informed of the potential losses they could suffer

“It’s a huge problem for a lot of people, most of these people are on the verge of retirement and should never have been sold these products. This is a sophisticated level of investment.” Chris Christofi – Financial Times , August 26 2011

Many people have been sold foreign currency mortgages by banks across Europe . There are differing factors applying in different countries and differing individual circumstances, most notably in Cyprus where British property buyers were advised to enter into these mortgages.

At Christofi Law we are leaders in this area and can advise you how to bring your claim against the Cypriot Banks, developers , lawyers and Independent Financial Advisers ( IFA’s) who advised in the UK.

“In an ideal world, I’d like the mortgages to be declared void …”

How the Hedge Arrangement Works 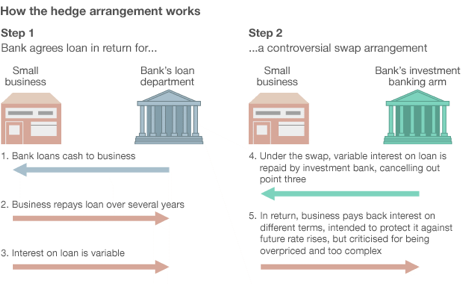 Banks will generally seek to control your ability to sue them through the use of draconian terms and conditions.  They may try and “call in “ a loan by alleging that their customer – particularly if it is a small business – is in breach of terms and conditions of a loan agreement or legal charge.

Also in this section

LAND BANKING FRAUD BACK - BEWARE ONLINE AUCTIONS - sale through auction houses – have you been tempted to bid for that fairy tale plot?